The History of Reiki

The history of reiki differs amongst many books as there had been little known about Dr. Usui and the origins of reiki. I feel it is important to look at how reiki evolved through the reiki lineage and how it was adapted to the needs of the students rather than a one fits all system.

The system of reiki contains many different aspects which can sometimes be overlooked as they appear to be ‘simple’.

The reiki principles are often seen as the foundation of the system which help to bring reiki awareness into everyday life, the true meaning of reju and how it came to be called ‘attunement’, embodying the symbols traditional meanings through our self practice and meditation and of course, the important of daily self practice .

There is a depth to reiki and we can cultivate a relationship with our reiki practice which can keep teaching and guiding us.

Reiki was rediscovered in the mid 1800’s by a Japanese born Buddhist monk, Dr. Mikao Usui. While teaching in a college, Dr. Usui was asked by a student how Jesus facilitated the healing miracles that he performed. The question had planted a seed and set Dr. Usui out on the path to answer ‘that question’. Dr. Usui was determined to learn the secret healing so that he may help others and his journey took him to many countries.

During his journey Dr Usui travelled to the holy mountains of Kori Yama where he fasted and meditated for 21 days in order to attain a high altered state of consciousness which he believed would empower him with the healing energy. On the morning of the 21st day, Dr. Usui was beginning to become frustrated with his situation. As he was about to give up and leave, that a great spiritual energy came down into the top of his head and he became enlightened. The energy also bought with it Reiki Ryoho, which is the ability to heal.

Dr. Usui returned to his monastery but decided after a few days to go to a beggar city, in the slums of Kyoto, to treat beggars and help them lead a better life. He spent 7 years in the slums, treating many illnesses. However, he noticed that the same individuals were returning. When he asked one of them why they had not started a new life he was told that it was much easier to go on begging than carry the responsibility of starting over.

For Usui, reiki was a spiritual practice – an opportunity for each person to awaken their true nature. He adjusted the teachings to each students. Some students would have received symbols to study and chant, others may have be given the task of contemplating a reiki principles etc. 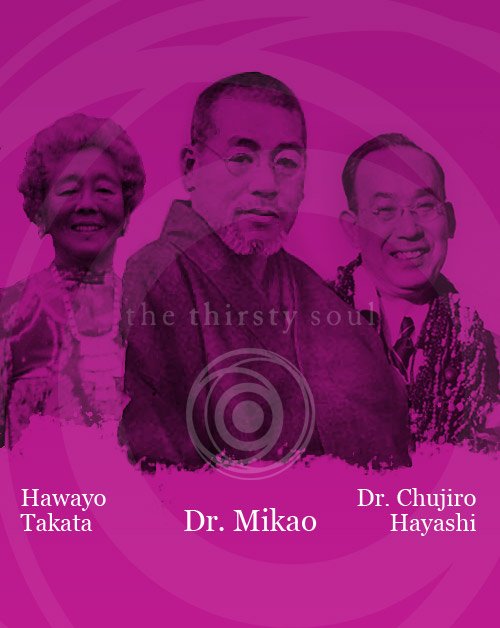 One of Dr Usui’s pupils was Dr Chujiro Hayashi who continued in the steps of Dr Usui by opening a reiki clinic which remained opened until 1940. He became a student of Usui in May 1925 and is one of the twenty one teacher students of Usui. He was a retired Naval Officer and surgeon and he studied with Usui for 10 months before Usui died in March 1926.

Dr Hayashi developed a new style of Reiki, which has the same energy and lineage as Usui Reiki, and many of the original techniques but is also responsible for the formal aspects of reiki which are taught today – namely the hand positions, the science-based practises held within reiki and instead of Usui reju, he taught an ‘attunement’.

The fame and popularity of Dr Hayashi’s clinic spread throughout Japan, and it was quite successful at bringing healing energies to many people. It was here, the emphasis was on healing rather than personal development (Usui saw reiki as a path to your true self – a spiritual path)

Mrs Hawayo Takata was a Hawaiian woman of Japanese descent born in 1900. After the death of her husband and sister, she became sick and decided to travel to Japan in search of a doctor who could perform an operation which was deemed necessary in order for her good health to return. While in Japan, she felt strongly that the operation (for tumour, gallstones and appendicitis) would be unnecessary, and she inquired if there was any alternative way for her to be healed. The doctor referred her to Dr Hayashi’s clinic.

Mrs Takata began receiving regular weekly treatments. Over a period of several weeks, her health improved drastically. She was amazed and asked Dr Hayashi to teach her how to transmit reiki energies to others. He agreed to teach her Reiki I and II and she studied with him from 1936-1938. She is one of the thirteen teacher students of Hayashi Chujiro.

She was the first to bring Hayashi’s teaching to the west when she returned to Hawaii where she began to practice reiki. Two years later, she convinced Dr Hayashi to come visit her in Hawaii so he could see her reiki clinic, where he decided to initiate Mrs Takata into the third degree of reiki.

Mrs Takata continued giving treatments and began teaching level 1 and level 2 reiki students. In the 1970’s, she began training other reiki masters. For over 40 years she used storytelling to teach people about the system she called Reiki and its history.

By the time of her transition on December 11th 1980, Mrs Takata had trained 22 reiki masters. It is from these teachers that reiki has mainly spread throughout the west.